For LGBTQ+ history month we asked Gary Horrocks, editor of Judy Garland – a Celebration, why is Judy Garland so revered in the community? He kindly wrote back with this wonderful article.

Judy Garland is the greatest gay icon of them all; revered by the LGBTQ+ community over fifty years after her death. Forever gingham-clad, ruby-slippered Dorothy. The living embodiment of the Old Hollywood movie musical. The diamanté diva who personified showbiz razzmatazz and faced personal travails with an indestructible stoicism that resonated with the gay community. What a great opportunity to celebrate her life by showcasing some of her wonderful appearances in the UK.

Judy Garland’s career spanned five decades. Singer, actress and dancer she bequeathed an impressive legacy of movies, records, radio broadcasts, concerts and TV shows. The emotion, vulnerability and sincerity of her performances have endured through the years with new generations discovering her work.

Born Frances Ethel Gumm in Minnesota on June 10th 1922 she performed for 45 of her 47 years. During her 15-year tenure at M-G-M she starred in some of Hollywood’s greatest musicals. With her success and escalating workload came a debilitating reliance on medication for weight loss and insomnia. Apprehensive and exhausted, Judy was released from her “treadmill” of a contract in September 1950 having made millions for M-G-M. She made an insightful prediction: “The slate of the past is wiped clean. My best years and my best work lie ahead of me, and I’m going to give them everything I’ve got.” So began an impressive international theatre, nightclub and concert career. 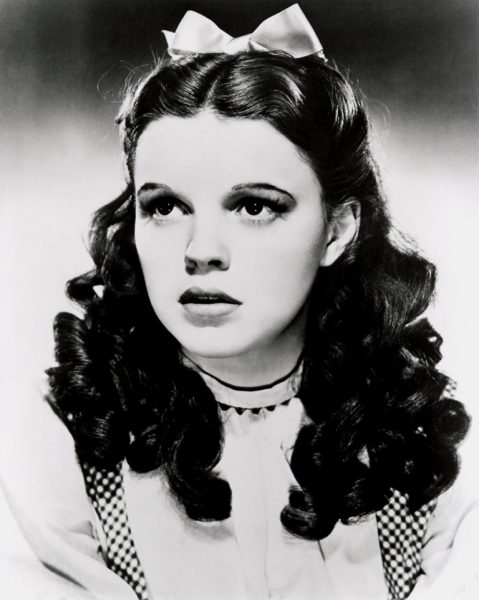 Judy Garland as Dorothy in The Wizard Of Oz, 1939. Reproduced under the Creative Commons.

It all started in a gloomy, post-war London when an announcement that “Hollywood’s Singing Sweetheart” was visiting generated curiosity and anticipation. British fans had observed Judy growing up, applauding her triumphs, empathising when she was down. They’d heard her songs on the radio. They’d frequented cinemas, experiencing her musicals throughout the 1930s and 40s. Mickey Rooney and Judy epitomised youthful optimism and happy endings. ‘Over the Rainbow’ offered hope and escape from the misery of warfare.

Her debut London appearances intensified this love affair with British fans. Judy’s shows were always special events attracting international celebrities, society’s great and good and fans of all ages and walks of life. Garland respected their loyalty, inviting them backstage, to recording sessions and after-show parties.

On April 9th 1951, a trembling Judy was pushed onto the stage of the London Palladium like a shy schoolgirl wearing her heart on her sleeve. After her fourth number she fell flat on her backside and had to be helped up by pianist Buddy Pepper. It broke the tension and her self-deprecation and lack of affectation delighted the audience. Adulation, ovations and roaring applause during her four-week season in London restored Judy’s optimism and confidence and she went on to tour Scotland, England, Ireland and the US. She recalled with delight: “I came full of fear; I left full of hope. I have found where I belong – out there under the limelights singing for my supper.”

On October 16th 1957, “Miss Show-business” premiered a four-and-a-half week season at London’s Dominion Theatre. “I have to be better than I have ever been tonight. It’s a debt I owe. London gave me back my faith in myself.” After the show luminaries including Vera Lynn, Petula Clarke and Alma Cogan presented her with flowers. Judy was “the essence of real star quality,” wrote one observer. On closing night Judy invited fans to an on-stage party. At the Royal Variety Show Queen Elizabeth confided, “We missed you. Don’t stay away so long next time.”

In November 1959, Judy was hospitalised with life-threatening hepatitis and told she would never work again. In August 1960, rising like a phoenix from the ashes, she launched her first thirty-plus song, two-act solo concert at the London Palladium. An Evening with Judy Garland provided the blueprint for a successful tour of England, Europe and the US that included her April 1961 five Grammy award-winning recording at New York’s Carnegie Hall.  During her 1960 London stay she visited Abbey Road studios to record her songbook for posterity. Fans invited for one session recall her professionalism, guiding and advising the orchestra and chorus. 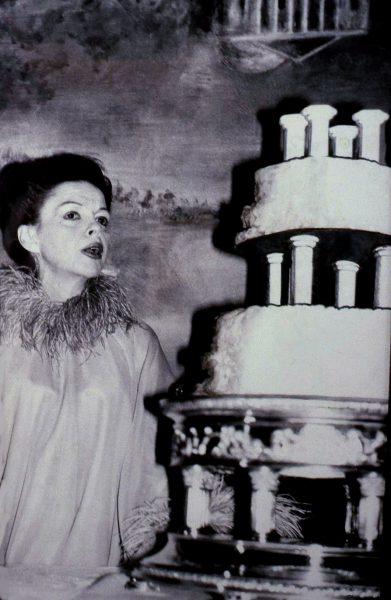 Judy Garland at ‘Quaglinos’ Jermyn Street London on her wedding day in 1969 with her wedding cake. Picture by Allen Warren, reproduced under the Creative Commons.

In 1962 the Palladium and London provided the backdrop to Judy’s final, only British movie ‘I Could Go On Singing’ co-starring Dirk Bogarde. Her fan club made up a significant proportion of the audience at the theatre during filming. She returned in March 1963 for the world premiere, and debuted her hauntingly beautiful rendition of “Smile” on live television with Bogarde crouched in the orchestra pit offering encouragement.

In November 1964 she performed two sell-out concerts with daughter Liza Minnelli at the theatre. She was immensely proud, encouraging one journalist, “Don’t write about me, write about Liza and how wonderful she was.” Close friend Lionel Bart was in the front row when she flubbed the lyrics to one of his songs. “If Judy forgets the words, there must be something wrong with my lyrics.” Judy even took time out to attend a fan club meeting, singing and poking fun at her old movies.

Garland relentlessly spent the second half of the 1960s working to fend off crippling debt accumulated through her management’s mishandling of her finances. On her return to London in December 1968, to perform a five-week run at the Talk of the Town nightclub, she was depleted and frail after years of stress, overwork and addiction to medication. There were highs and lows, but audiences and reviewers always found her magnetic and riveting. In January 1969 she also appeared on the Palladium stage for the last time singing ‘I Belong To London’ in homage to her happy, nostalgic, “good luck” theatre and the city she loved.

On June 22nd 1969, she died at home in London. “Tired,” said Liza, “a flower that gives joy and beauty to the world and then wilts away.” “It was not only with her voice but her whole personality that she filled the theatre,” wrote an observer in 1951. A persistent memory of family, friends and fans was that personality, the wicked sense of humour, the raconteur able to laugh at the world. Columnist Earl Wilson wrote: ‘Wherever she’s gone; she’ll get in.” 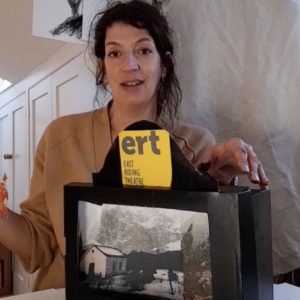 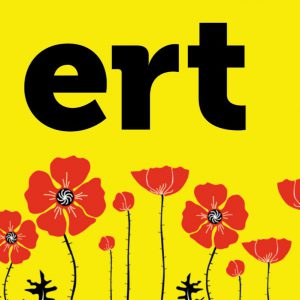 Live In Your Living Room: Joshua Burnell and Frances Sladen